Be Warned: No Spoilers

Firstly, before I get into this review, I have to say that Matt Shaw has balls. This world he built is highly controversial, and to publish it as well? That takes guts.

Now, be warned, Sick Bastards is not a book for everyone. Mostly, I’m pretty sure only a few people can handle it. The cover even comes with a warning label. With that said, this review won’t go into the details of the story for two reasons:

To start this review, I need to open with a premise. The content of the story is for the sake of fiction, the character development, and the plot. This is good to remember if you decide to read the book. This is not a story for readers to insert themselves or their moral standards onto the character/s. And, just as a disclaimer, the events and devices used in this book are not condoned or acceptable for real life. Yes, you’re probably getting an idea of this already from just this introduction.

Content aside, the story is great. Shaw has his characters nailed to a T. Well-developed and with proper character arcs we get to see throughout the story. The non-linear approach was an excellent decision in how to tell the story, giving flashbacks of important events to the narrator’s life from the moment he woke up in the house—with no recollection of anything prior.

Shaw also masterfully weaved curiosities in the form of details about the world and the scenario that carries the reader through with the mystery. The planes the sometimes fly overhead, the clear skies and green grass, the birds. How did the characters get there, what are those things in the woods, and what exactly happened to force the characters into such a situation?

And an unpredictable story. The build up to the climax and resolution is excellently crafted. While I suspected what the truth was from about part three, I wasn’t exactly confident. Horror has a tendency to either go directly they way you think or not at all. So it was satisfying knowing I suspected right. All the signs were there but the way Shaw weaved them had me suspicious even further that they were only red herrings.

What set me off sometimes from the story was a little bit of authorsplaining (which isn’t so bad, honestly), the repetition of certain facts, and the purple prose. These are, of course, purely my own reader preference and they don’t necessarily detract from the story itself. The big repetitions are clearly used as a device for the atmosphere and tone of the latter parts of the story, though I’d have preferred if they gave new information of the same scenes instead of the word-for-word repeating.

I usually read the Author Notes or Afterword of a story I enjoy to glean some insight into the mind of the writer, and in this book it is definitely recommended to do so. This is the first time I’ve read something from Matt Shaw and, suffice to say, I look forward to reading his other works. It’s such good writing, I devoured the book in under a day. One, non-stop sitting. 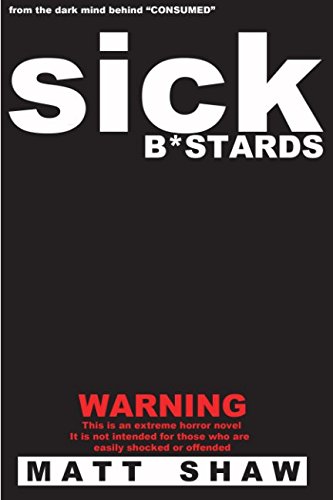 Sick Bastards: A Novel of Extreme Horror, Sex and Gore, by Matt Shaw and published in 2014, is available to purchase here.