Kate Wrath has built a wonderfully dreadful world in the first book of her series, simply titled E, and it’s huge. The politics, socio-economics, crime versus legality being blurred. E has a fascinating dystopia, hinted with some strangeness not in our reality and those little things have a huge impact on how the world is perceived.

E is slow to start in the character department but packed with action, mystery, and suspense from the get-go. After a few chapters, the characters get much more interesting and the plot gradually thickens. Wrath’s pacing is well done, giving enough of the slow scenes to let the reader breathe before it can become boring, then leaping into another fast scene.

Eden, the narrator, could have been more developed. I would have liked more characterisation in the opening chapter to get to know her early on. Sure, Eden doesn’t remember anything, but she has internal dialogue and that can reveal plenty about her personality. But she grew on me after a while, somewhere around the middle of the story when she starts to get more personality and come alive.

While I enjoyed the story, there were some gripes that broke me out of the flow. One is the sexual tensions and subtle near-action flirting between her and three characters that feels stretched out beyond its capacity. The cliffhangers at the end of each scene becoming tiring and jarring when the next scene starts and everyone’s okay and alive. This may be why Eden feels distant, why I don’t care about her, because I don’t see any resolution, even how remote, to the major shocks presented as the closing of most scenes.

As someone with aphantasia, the excessive detail on Eden’s surroundings, actually anything she sees, is a put-off. It’s just information I can’t do anything with. This is, of course, not something that will be shared with the majority of readers so it’s a rather personal opinion.

I also wasn’t too keen on Eden suddenly, and especially without some reaction, knowing so much about how the world around her works from the second chapter onward. Some of its workings she discovers by actively trying to figure it out but other times it’s just there with no external source. This wouldn’t be too jolting if there were some reactions from her about her re-emerging memories and perhaps also some further reflection on them and their significance.

The story is otherwise really good, and the world-building is captivating. I think I’d have long abandoned the book if it weren’t for the need to find out what’s happening to the Outpost and the other characters, specifically Matt and Apollon. On that note, I really need to read the next book, Evolution, and discover more. Wrath has this feel in her writing that hooks regardless of anything I mention above, and I couldn’t stop reading. 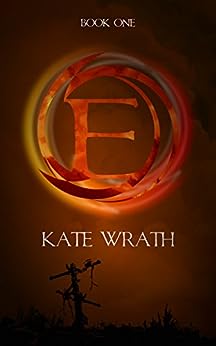 E, by Kate Wrath, published in 2014, is available on Amazon.