Be Warned: Here be Mild Spoilers

What does it mean to be an exile of your homeland, to have the pressure of expectation that you’ll do great things and save your people, carrying a mark that shows everyone that expectation, the promise you never had a chance to make? This is Isten’s life and story and Darius Hinks takes us through a fantastic world to show Isten’s present predicaments, history, and her future in The Ingenious.

But there’s so much more at play in this story than just Isten. There’s a strong sense of pre-destiny for the characters, each playing a vital role in bringing about the end game, possibly salvation. Very reminiscent of Dune‘s plot arc and I love it.

Hinks takes the reader on a perilous journey, through the grim of the ever-expanding city, to the surreal wonders of the consciousness. And it’s exhilarating.

By far, my favourite character is Phrater Alzen. He’s relateable, in a way, with his pursuit for understanding, wanting to know the intricate and majestic wonders of the universe, what makes it work. He’s a misunderstood person and convicted by a limiting system of good versus evil, and what constitutes as either.

As much I enjoyed Alzen and learning more about him, the scene with him and the emerald lion known as Mapourak is, for me, brilliantly executed. The confusion and reality sinking in, the detached horror as a result. Masterful writing right there. Vague, yes, but you need to read it to truly capture what I’m referring to.

“No one is above death, they cried, not even the Elect. The living walked on, oblivious, and the dead fell back in despair, forgetting what they had learned, sinking into darkness.” – Beginning of Chapter 11.

The world-building is superb! So much familiarity within the story even though it’s a rather unique take on alchemy and fantasy. The nods and hints to, among others, Terry Pratchett’s Discworld concept, Frank Herbert’s Dune, and The Magic Faraway Tree by Enid Blyton. I also loved the slight hints of science wrapped within the narrative that helped make the world seem real.

I’d have liked if at least half of all the filter sentences were converted into showing and the descriptions of the surroundings lessened to make room for said showing. To give a deeper immersion of what’s happening and how the point of view characters felt, instead of being told how they felt and experienced things. I can understand the choice to tighten the narrative with filters, though seeing Hinks’s writing skill, I suspect he could have easily made it work and kept it as tight as it is.

The Ingenious is a wildly fantastic story. Take everything you think you know about fantasy fiction and throw it in the deepest, darkest trash pit, because this story will take you to a new meaning of the genre. Hinks has taken the best of so many favourites and spun them in new ways with his own ideas that just makes the world, characters, and overall story so colourful and inviting.

And the cover art, created by John Coulthart, is spectacular! A fitting depiction of the atmosphere, world, and tone of the story. 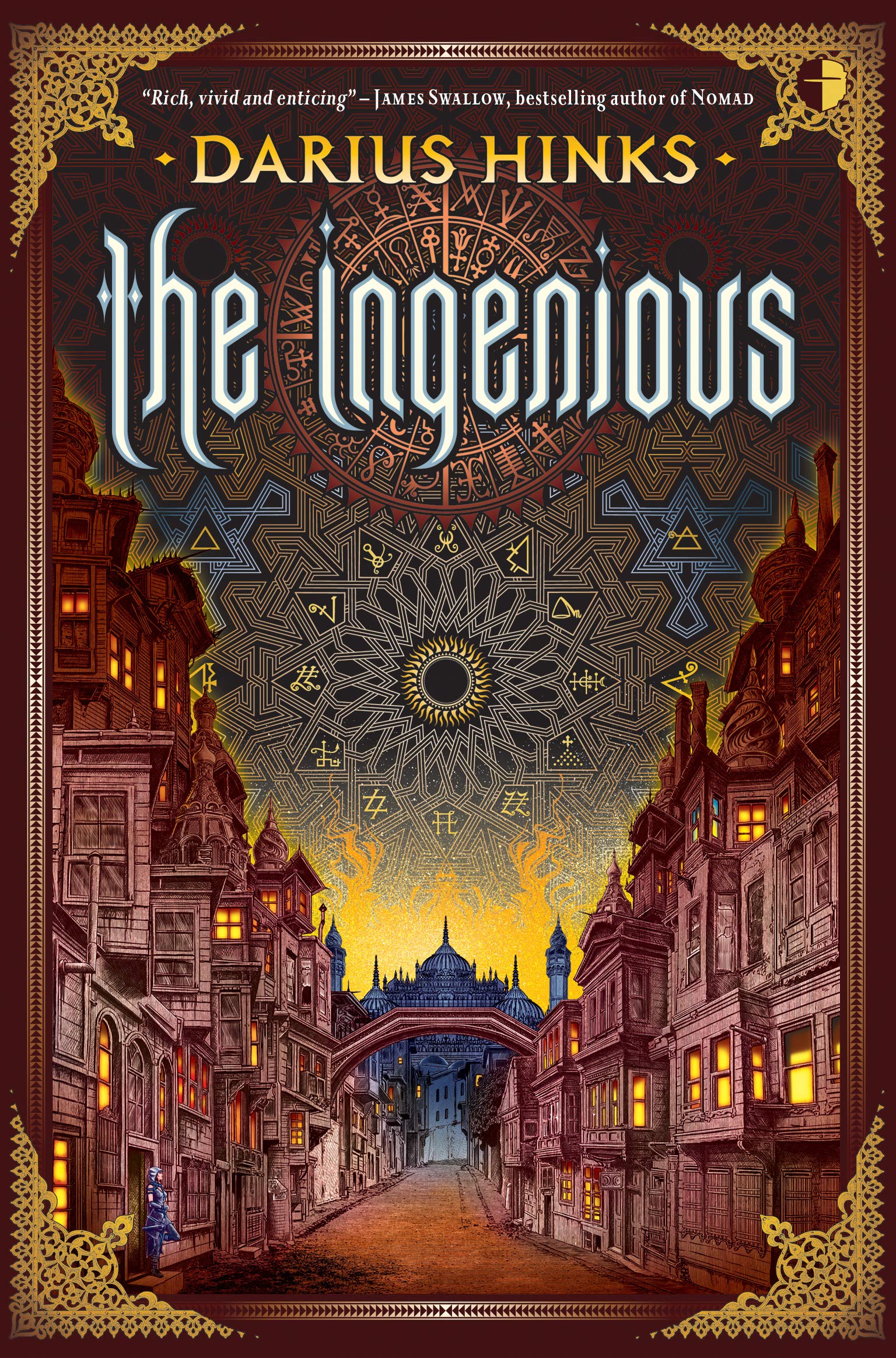 The Ingenious, by Darius Hinks, published by Angry Robot, is available for pre-orders and will be published on 5 February 2019.