Earlier this week, the Winter 2019 issue of Illumen magazine was published and made available for purchase. In this issue is my first poetry sale (!). The poem in question is titled Abaddon. My poem is published alongside fellow writer and poet, Jasmine Arch, who is also a friend and in my critique group, INK-ubator.

Back to the poem. What is it about, why the title, and why would you read it?

Abaddon explores the final moments before a star implodes and a human on the planet orbiting it, one of those few who have survived until that point, before inevitable demise. Along with her are the last of the plant life, slowly withering. They only have a few minutes and it’s spent in silent reflection.

The poem was the result of poetry challenge given by Damian Jay Clay, a friend and fellow member of INK-ubator. His challenge was to decide on a consonant and find 50 words ending on the same phonetic letter. With those words, construct a poem where each line ends on one of the words, never repeating. And as an extra challenge, prevent any lines from rhyming. I chose the letter “N” as phonetic in “sun”. And “abaddon”. The title needed to be the same as the last words of the lines.

So why “Abaddon“? It means “destroyer” and I found it fitting to write about. What’s more destructive than a star? And the dichotomy of its nature was what made the concept of a dying star more tantalising. The idea struck from inspiration due to Unleash The Archers‘ song titled Time Stands Still, specifically the chorus. Further influence for the poem came from the character Abaddon the Despoiler from Warhammer 40k and his Black Crusades (which I find relevant to today’s socio-political climate, though the poem is removed from this).

But why should you check it out? Hey, I’m not going to tell you why you should or should not, I’m highly in favour of leaving decisions to the individual to make. Though, I will make an argument for it. Illumen is indie backed, and Alban Lake does a lot for emerging writers and established authors in a market otherwise difficult to break into. Illumen is also focused on the SFF in poetry, which is relatively new and as yet has little support on the overall. Not to mention the importance and significance of speculative fiction in our history and our future, which your support will help keep relevant and thriving. Your support would also support me, as well as other writers in SFF.

Be Warned: Here be No Spoilers

The Storm follows the adventures of Lord Pal of Beune, a Champion of Mankind. Much like Lancelot’s humble beginnings but a better version of him. A much better version of him. Lord Pal navigates the world, between pockets of what is known as Here and the waste where the Not Here manifests at times. A bizarre world, for certain, but it fits so well.

I’m not quite sure how to explain the book without revealing everything, it’s just one of those books you have to read yourself and come to your own conclusion on what the story is like, how it makes you feel. This is the second book of the series, however it is written in such a way that not reading the first book doesn’t leave you feeling like you’re missing out on something vital. Drake has written this story to make it complete within this book as a stand-alone.

That said, I’ll give my review based on mulling over my thoughts for a couple of weeks. Yes, it’s that complicated. But the story isn’t, which is interesting. David Drake has a way of evoking a certain feel with his writing that has me reeling trying to figure out and analyse it. Drake’s writing is, frankly, beautiful. It’s smooth, if it had a physical texture, and easy to follow. But the voice of the story, the way I hear it in my head, is something I cannot explain.

Oh, by far my favourite character is Pal. He’s so real, relateable,humble, modest, and human. And yet, his strength is visible, I don’t mean physical strength either. His will power seems to seep out from the text. A character I truly care about.

I don’t have one specific scene I enjoyed above others, though I thoroughly enjoyed every scene where Pal interacts with May, his consort. The wit, the human reactions, and the squabbles between them are so real and very entertaining.

“That seemed to be her standard method of breaking tension. It was a good method.”
– Lord Pal’s thoughts, the context of which you’ll have to read to find out. Trust me, it’s brilliant.

The Storm is, by far, one of the most intriguing and different stories I’ve read and I’m honestly not sure how to express how I feel about it. The book definitely has an Arthurian feel and vivid, wild world-building that I’m absolutely enamoured with. I’ve never read science fiction, or any speculative fiction, like The Storm before. Suffice to say, I’m speechless.

I love the world, love the characters, and the plot is solid. I can’t find a fault (which I naturally try to without meaning to), and that says a lot. I am mind-blasted, to say the least. And yet, I don’t know if I love the book or not. I do, but at the same time not really. It’s confusing. I can’t stop thinking about it and find several things in daily life that remind me of some aspect of Drake’s world and characters.

I know, I’m rambling but I can’t help it. Writing this is the most difficult review I’ve had to do.

This story will stick with me for my whole life, I’m certain of it. Which is very rare, only a handful follow me in the back of my thoughts. The Storm is nestled in there alongside Asimov’s The Last Question, Lem’s Solaris, Clarke’s Childhood’s End, and Okorafor’s Binti; stories that have a profound influence on me.

The Storm, by David Drake, published by Baen Books, is available for pre-order and will be released on 1 January 2019.

Be Warned: Here Be Spoilers

The Fireman, by Joe Hill (son of Stephen King), is set in a dystopian and post-apocalyptic world where the theme is the race for survival of those infected with a fungus called Draco Incendia Trychophyton, or more commonly known as Dragonscale, the ‘scale’, or the ‘spore’. The story is told through the perspective of the main protagonist: Harper Grayson (neé Willowes), a nurse who believes in her work despite her own safety.

Harper works at Portsmouth Hospital, New Hampshire, where she meets the Fireman while treating people who have Dragonscale. Although beautiful, Dragonscale is deadly; causing people to ignite and incinerate from the inside out. Due to a chain reaction of incineration, Portsmouth Hospital burns down. Nurse Harper later discovers that she’s pregnant, and a couple weeks after, sees her first black line on her thigh indicating infection. Harper must survive through many life-threatening scenarios, including the one from within.

Harper, along with the Fireman John Rookwood, Allie and Nick Storey, and Renée Gilmonton, fight off not only the deadly effects of Dragonscale but also firing squads, police, and their once community of infected. All to find a sanctuary where Harper can deliver her baby safely and they can live without the constant threat of death.

A curiously good read, leaving suspense and action throughout the chapters that creates the urge to read just one more page before bed. The Fireman has an original take on a possible apocalypse of the world with the potential of its events going horribly wrong all the time.

Definitely John Rookwood with his glum, dark humour yet playful demeanour and view of the current predicament of the world. As the Fireman, an image he has taken upon himself through a jest with his late girlfriend, John sets out to rescue and help others with Dragonscale. In a world burning, looking like a fireman is the best way to stay inconspicuous.

John understands the fungus and is able light himself on fire without burning, throw fireballs, and project himself as a huge fire devil. John also creates a phoenix of flame and spore, which Harper finds is more like John than him in his human body.

The fire devil scene, when John, Allie, Harper and a few others went by row boats to rescue two small-time convicts with Dragonscale, hiding from the police. John creates a distraction for the police and firemen by making himself into a large devil, complete with horns, wings and tail. The fire that was John, created enough chaos and smoke, allowed the trapped men to escape to the boats. John even fire-forged a pitchfork during his showing-off of power.

“A better name for Dragonscale would be the Nietzsche virus- if it doesn’t kill you, it makes you stronger.”

The concept of an incineration fungus. Combining spontaneous combustion with infection really tickled my nerd-fancy, as well as the (speculative) scientific takes on the ‘scale’ and its abilities and effects.

The lack of terror put me off. I kept reading and reading, waiting for horror. The essence of horror was there: the infection that makes you burn yourself alive and the psychosis of the people with and without the infection, but there were very few horror scenes happening to the main characters and, in the little that was, the characters seemed to brush it off as odd but not unnerving.

While the book was a great concept and a good, easy read, it lacked so much. The potential was bursting through the words for a truly terrifying experience but the story has no dread. The crippling fear of knowing that you could burst into flames at any second, not to mention the horror of seeing everyone around you burn alive from inside, was barely touched. The Fireman read more like a sci-fi drama than a horror, which I still appreciate and it is still a really good book: a book you could read at night, alone in an abandoned mansion during a thunderstorm and still sleep well. It left me dreaming about firebirds and dragons. 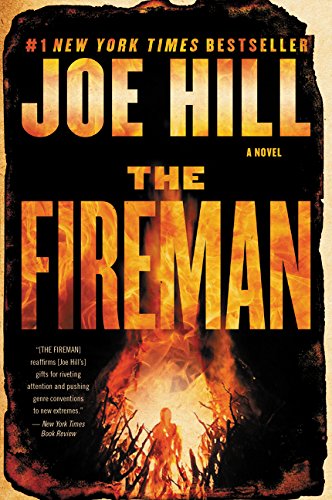 The Fireman, by Joe Hill, published by William Morrow and Company in 2016, is available for purchase here.